Incubation solution
With the incubation solution from Maier + Vidorno , we successfully placed our products in the Indian market and established valuable product market presence, which we can now build on further with our subsidiary

Competent Partner
India has great investment potential for foreign companies if you manage the highly complex business environment professionally. Our experience shows – Maier+Vidorno is a competent partner to efficiently set up and run business.

Market Presence and Profitability
The cooperation of JUMO and Maier+Vidorno is a success story in India since 2008. Our sales, market presence and profitability in India shows constant growth. M+V knows about the challenges foreign companies face while doing business in India – and provides hands-on solutions.

Rene Pluss CFO, Member of the Board / Regent Beleuchtungskorper AG

Business Diagnostic and Implement Improvement
Maier+Vidorno understands business challenges in the Indian business environment and provides solutions with the help of its experts. M+V has experience in running business diagnostics and implement improvement and expansion strategies in various industries in India.

India was for years a ‘fly-over country’ for Peter Vyncke, who runs the Flemish family business Vyncke together with his brother Dieter. “Before my brother and I took the helm, I headed the Asian department of Vyncke in Kuala Lumpur, Malaysia. At the time, we focused completely on Southeast and North Asia, we didn’t have India in our sights. Until I suddenly lost an important order from an existing Malaysian customer to an Indian competitor. There was only one right strategy for that, fighting them on their own turf.

Peter’s great-grandfather came up with the ingenious idea, as the Flemish CEO himself likes to describe it, 100 years before the Kyoto agreement to convert coal-fired boilers into biomass boilers. “Those first Vyncke boilers were fired with waste from the flax industry. But now they can be used in almost every sector. We can convert all kinds of residual products into energy, from cocoa shells to woodchips”. Vyncke’s energy installations, therefore, sell well in countries around the equator, where large industries produce more biological residual waste, such as the coffee or palm industry.

The Belgian company Vyncke has been active in Asia for more than 40 years, but only ventured into the Indian market ten years ago. “From 1996 to 2000, I led the Asia branch of Vyncke from Kuala Lumpur,” says the Vyncke top man. “We focused mainly on China and the southeast of the continent and not at all on India. Until suddenly one of my major Malaysian customers is hijacked in front of me by a competitor from India. That made me realize that I had to delve into the country. Not only to see what opportunities there were for us but also to make things difficult for that competitor in his own field”. 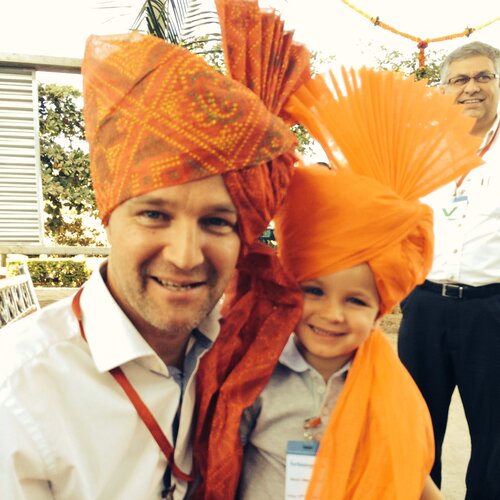 While the idea to start in India starts bubbling at Vynckeneers, Vyncke gets special visitors in Belgium. “My father traveled around the world for Vyncke and on one of those trips he ended up in Pune, at the Indian company Forbes Marshall. He had left a message in the guestbook there. To our surprise, 25 years later, a Forbes Marshall employee, with a copy of that guestbook message in his hand, suddenly stood on our doorstep.

The Indian company specializes in process efficiency and energy savings for the industry and at that time was looking for a partner to conquer the biomass market in India. “They just didn’t have the technical knowledge and that’s how they came to us, says the Vyncke director. “We immediately had a very good click. Forbes Marshall is run by two brothers, and we too are at the helm of Vyncke. We have the same attitude to how we do business, business can’t be done without a little fun. In addition, we complement each other perfectly in terms of knowledge: we have the technical knowledge, they have the knowledge of the Indian market”.

This Is What You Need To Start A Joint Venture

The companies therefore officially decided to set up the ForbesVyncke joint venture in 2010. “That has been the very best way for us to enter the Indian market. With our experience, we would certainly have been able to do it on our own, but it would have taken much longer for us to be up and running,” explains the Belgian CEO. “Forbes Marshall took charge of setting up the company and immediately put his best people forward. As a result, we got off to a flying start. Within two years, we were already in every corner of the country, selling only to premium customers at around 20 to 30% higher prices than our competitors. We now have an annual turnover of around 20 million euros.

Give each other space in the collaboration

Peter advises every company that is considering starting up in India to find a good partner. “When companies say they only want to start, I always ask: ‘Are you really sure?  India is a country of 1.3 billion people and the bureaucracy is a maze”.

Partnering with a partner who knows the market and the way of working takes away a lot of start-up problems.

“Our partner has the responsibility for the business operations within the joint venture. So everything from sales and HR to legal lies with them. This allows us to concentrate on our core business, the technology of the product. Because we both focus on our strengths within the joint venture, the company runs like a train, says Vyncke. “If you opt for such a structure, you don’t have to micro-manage things that are outside your remit. Give the other person the space and confidence to fill in the framework you put together as you see fit. No one in India is waiting for a Western company to come and tell them what to do like a sort of colonialist”.

Don’t Sell It As Green, But For The Dough’

According to Peter, the advice not to be pedantic as a foreign company in India also applies to the product you bring on the market. “Take as an example our product, which is used by companies in Europe for the sake of higher morale. Namely because it replaces fossil fuels and is CO2 neutral. But in India, that’s not the motivation at all. There, it helps companies enormously in costs, to be able to make energy from the residual products they have left over”. Biomass in a country like India is a lot cheaper than oil or gas. That’s why India is one of the few countries in the world where more than 70% of the population depends on biomass for its energy needs.

“You should therefore not market such a product with a pedantic tone, because it is better for the environment. For India, it’s a cheaper solution to the country’s energy needs. Don’t sell it as green, but for the dough.”

ForbesVyncke has had Vyncke’s biomass energy installations adapted considerably to the needs of the local Indian market. “The standard in India is still different, even among the international companies we work with,” Peter explains. “While in Europe the operation is fully automated, in India people are not prepared to pay extra for this. The labor costs are still lower than the costs they would have to invest for a fully automated installation. As a company you have to take that into account and not look down on it.

The CEO therefore advises every starting company in India not to start with too high expectations and strategies. “Growing in the Indian market takes time. Stay close to yourself, your product and find a good partner! We really have the best partner in the world. Because of that partnership, we have left that Indian company, which woke me up 20 years ago by hijacking my Malaysian client, far behind us by now”. Qualified Workers In India Can Be Found Here.